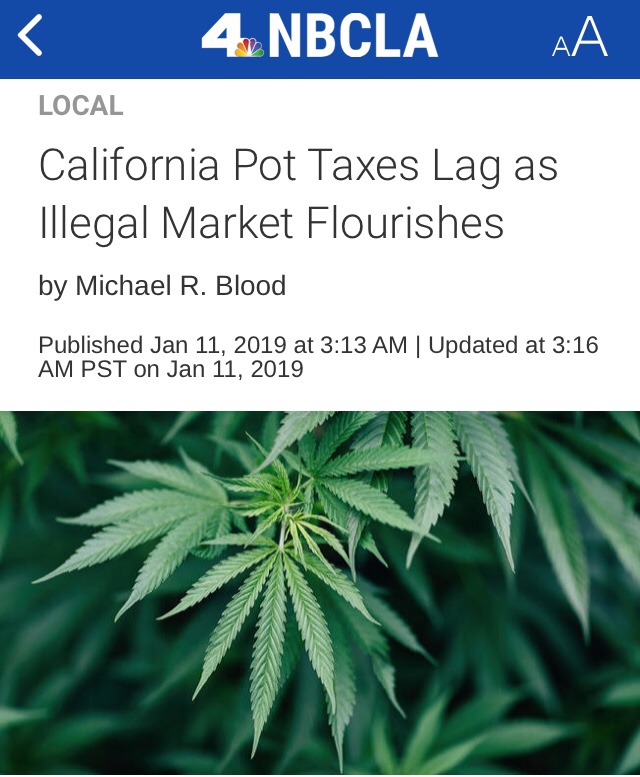 “Industry experts say the diminished tax income reflects a somber reality: Most consumers are continuing to purchase pot in the illegal marketplace, where they avoid taxes that can near 50 percent in some communities.”

Well we gave it a shot, it didn’t work. Time to go back to legislating morality and sentencing minorities to hard time for possession of a doobie.

Seriously, I wouldn’t even know who to call anymore if I wanted to buy illegal weed. Everyone I know has had the absurdly inexpensive and easily obtained medical recommendation for years. Which is exempt from sales tax – in the state with the highest rents, gas prices, and taxes in the country. When you factor all that in, California has the highest poverty rate as well.

Just another example of how the networks are complicit in legitimizing Trump. They really do publish fake news near 50% of the time, albeit never when he claims it. The other half gets printed below the fold. But it’s not because they’re simply greedy liars. It’s because of the part they’ve played in gutting journalism – the lucky few left “reporting” or fact-checking or otherwise gainfully employed with their corporations are just as galactically out of touch with most Americans as the politicians they buy to pass laws like the 1996 Telecom Act.

Yes, the Hollywood and Silicon Valley elite are real and they proudly wave their deep blue flags in our ultra-liberal state, led by winners like Les “It May Not Be Good for America, but It’s Damn Good for CBS” Moonves.