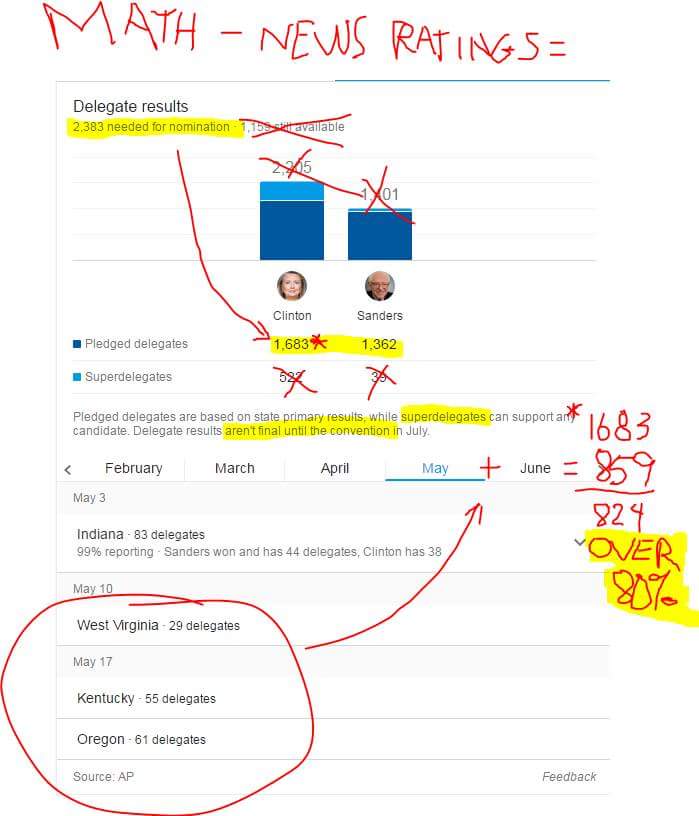 I only bring it up because, regarding this historic madness of crowds we’re calling an election year, I’ve literally done the math. I’ve thought it through critically. I’ve researched inane bullshit like superdelegates thoroughly. So, despite the endless deafening average opinion (which is formed with average intelligence), I just wanted to let you know I’m right about this.

While I passionately encourage you to work to find the truth out for yourself, to dig up the FACTS, you don’t have to if it’s hurting your head. I have a headache right now. But rest assured, a man tested as a boy and found to have a 140 IQ has already worked it out.

To be sure, many of the recreational activities I’ve considered a good time for 30 years, including playing the drums, have almost certainly knocked five to ten points off that score. Hey, let’s call it fifteen to account for working with solvents and spending countless hours surrounded by idiots because, God help me, I really love people. That still puts me at 125 which, at least by 1936 standards, secures my intelligence level at GENIUS.

I never bring this up. I find it inelegant and desperate. I bet if you search this blog you’ll find dozens of reference to genius and this will be the only one where the genius is me. But this IMPORTANT. I am desperate. This isn’t just another election year. This is the first chance in decades we’ve had to cast a vote or two for a candidate who is not only genuinely honest, but has inspired record-breaking numbers to CARE. A bona-fide movement to restore democracy. So it’s really, really important that you and all the smaller-brained Americans get it.

It’s simply, really: Anybody but the orange guy, right? Right. The only consistent polls have been the ones concluding that Bernie beats him more soundly than Clinton. Oh, but the superdelegates bla bla right? WRONG. I told you, I did the math. In fact, I checked the math another guy did and came up with the same thing.

Oh, I beg your pardon, you’re of the “anybody but Hillary” camp? Fine. Got a candidate for you who factcheck.org didn’t have to create a new category for because he lies so much (“King of the Whopper” – this is including the entire Bush administration). The candidate I’m talking about has been INDEPENDENT his entire career. You like those independent say-what-they-want types who stand up to Washington!

Well, it all just doesn’t matter because they’re ALL corrupt lying liars who lie, you say? So you’re just not gonna play the game, that’s how it’s gonna be? You’re half right. Pretty sharp, you! Imagine for a moment that you couldn’t vote even if you wanted to. That happens. It happens to people-loving nerds without so much as a speeding ticket on their record in thirty years because they drank too much and rear-ended a guy’s car.

I have no interest at all in owning a gun but I’ll tell you what: it sure feels good to know I have that right once I complete probation and they drop the felony charge. When no one listens to the genius and the misogynistic reality show racist wins and starts the zombie apocalypse, you BET I’ll be heading straight for the gun store to get a long range alternative to my katana. I will never take my civil rights for granted again. I’ll fucking drive drunk again before I do. Don’t do that. Take your civil rights like voting and owning a gun and even jury duty ferchrissakes for granted as well as not doing the drunk driving, I mean.

Genius is as genius does!