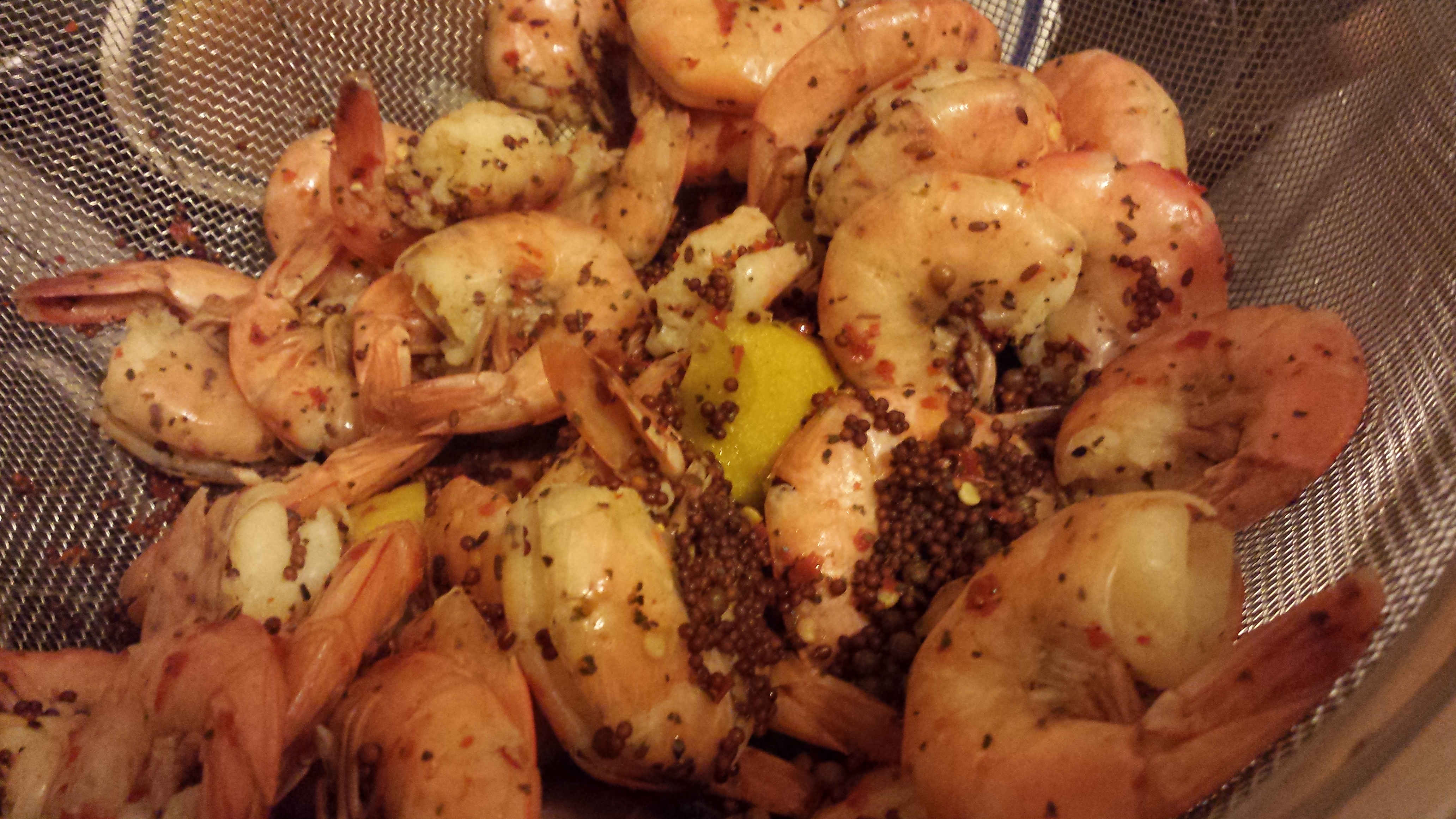 The lighting sucks in my kitchen. These shrimp looked so much better in person.

I cut some cove crown molding today to try and keep on with the finishing touches on the studio, but I eventually realized I was terribly distracted and should stop using a power saw. At some point I learned the Winslow Leach version of “Faust” from Phantom of the Paradise. I’ve covered that tune for years, but I came to do it more like Swan’s mix. Just seemed important to me at the time to make the selection more accessible. I was still terribly distracted. So I did this shrimp boil.

I did all of these things because I think Mary would want me to, and maybe she was a better friend than I deserved.

I stood over the sink taking shrimp out of the strainer one at a time and peeling them and eating them. I didn’t bother to plate them or even dump them on a newspaper. Or sit down, for that matter. They were delicious and perfectly cooked and every bite was wonderful. I could have eaten another two pounds.

I’m confident Mary wouldn’t want me to be sad today. She’d want me to finish the studio. She loved all the selections I did from Phantom, but by God “Faust” was like her theme song. The film is more relevant today than it was when it was released forty years ago, and in very much the same way, my thoughts about Mary and that song are more poignant today than when I met her less than ten years ago. God, how could it not even be be ten years? It feels like we were reincarnated at least twice in those ten years and somehow always found each other in our new lifetimes.

I stayed with her and her man, John, in Seattle when she got me a gig in town there. He stayed by her side to the bitter end today and he has my respect. I made them an étouffée with scallops. It was just okay, but she raved about it for years. I wish I could have cooked for her again. I wish I could have played for her again and stayed up all night drinking beer and talking about all of our troubles and hopes and geeky interests again. It hurts that I can’t, and I can’t stop thinking about that. Dream each other’s smiles and dream it never ends.

I would’ve done crawfish but all I had were these shrimp I was saving. I ate all two pounds of them along with as much regret as I could stomach, and I did enjoy that part of today.

I think Mary would want me to. I bet she’d want me to miss her, too, so I think I’ve done what I can to honor her wishes today. 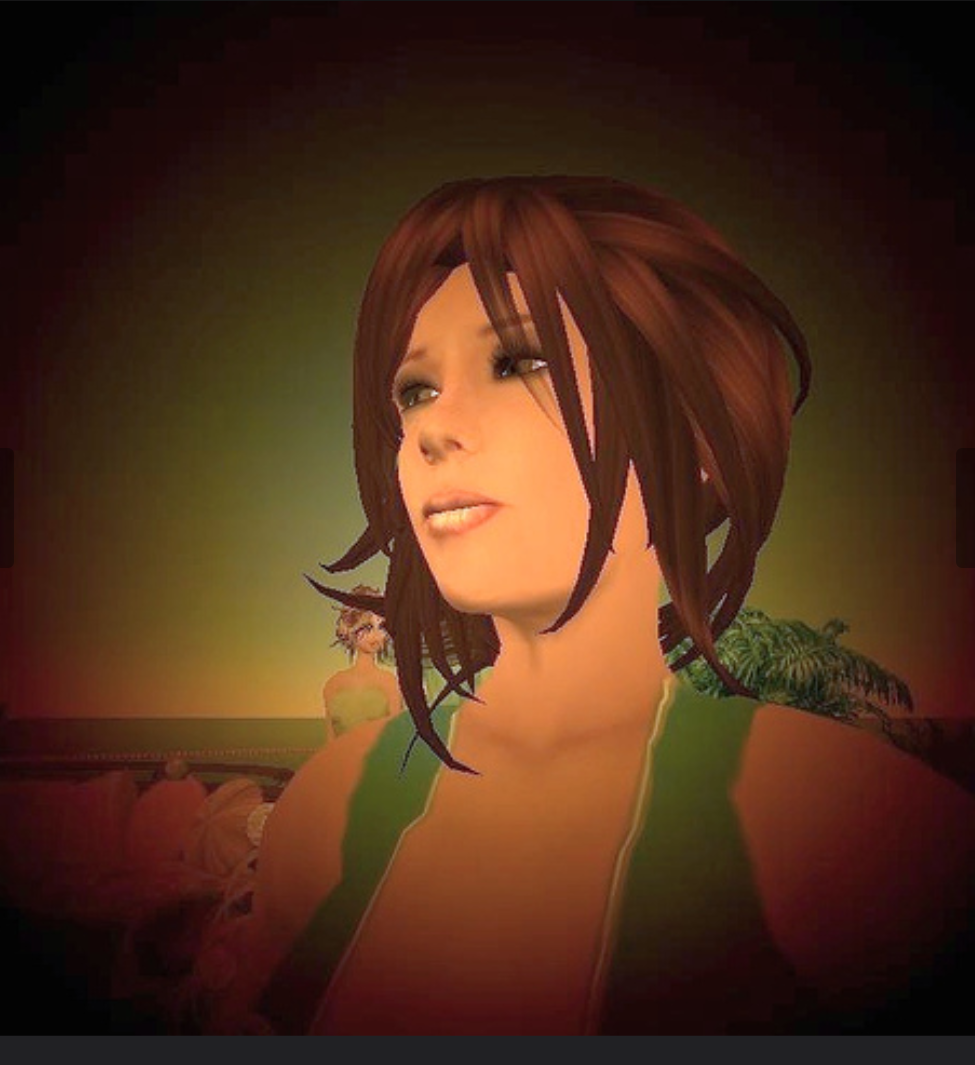 This is what Mary looked like when I met her in 2007. She quickly endeared herself to me by embracing a giant flamingo on the lid of my piano. You kinda had to be there, but the event was immortalized in song by Jen Finlayson and recorded for posterity on my 2008 release, Shed (https://kylebronsdon.com/albums/shed/).

Mary attended my very first performance after retraining myself at the piano, co-funded the aforementioned album, and booked me for possibly the most unusual gig I’ve ever performed.

In the face of soul-crushing tribulations and infirmities throughout the eight years I’ve known her, she has never ceased this kind of support and unmatched artistic encouragement. She’s one of maybe a half dozen people who, if they were the only half dozen to ever attend my shows, I’d keep playing.

Mary has tuned in to my simulcasts from a plywood shed, a concrete single-car garage, and a 5th wheel RV. Now, not because I needed help, but because she is so enthusiastic for me to complete the new studio – to be the first of all those ghetto, Breaking Bad studios with air conditioning AND heating – she donated a state-of-the-art ductless heat pump ac unit. With installation.

Even cheap mini splits are a fortune. And so is having a fan and friend like Mary.

One thought on “She was my friend”