Can you feel it? It’s that time of the year when the veil between the world of the living and the world of the dead becomes as threadbare as the trees. The perfect season to record some EVP!

If you’re not familiar with Electronic Voice Phenomena, they were first noted by Friedrich Jurgenson, who, after playing back a recording of birdsong in the Swedish countryside, is said to have noticed the presence of a faint Norwegian voice talking about ‘birds at night'. Jurgenson assumed this must have been a stray radio broadcast, only there was no radio receiver at the remote location where the recording had been made. Whatever the cause, it prompted Jurgenson to make further recordings in his home.

Voices that were not present during the recording allegedly continued to appear on playback. They were said to refer to him (and his dog) by their names and nicknames, predict an incoming telephone call (and name the caller, Jurgenson’s wife), and respond to questions and comment on the people and conversation physically present and accountable for in the room. 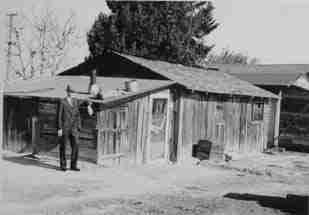 Was this our garage?

The AAEVP is an excellent resource for these phenomena, and has many examples and techniques. Fortunately, I’ve had some experience with filtering audio, with two self-produced music albums under my belt, so I thought I’d give the old garage a shot.

It’s really just a storage area with a workbench. We have our washer and dryer in there. But it’s an old structure, dating back to before the house itself was built in the 1920’s. We’re not really sure what it could have been then, but that’s what one contractor’s foundation expert said.

Dry wheat farmers and ranchers were the sole inhabitants of this sparsely populated area at that time. The photo below is from 1911. 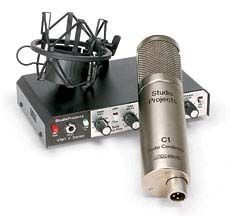 I used a digital recorder and frequency analyser, Wavelab, and a highly responsive C1 Studio Projects condenser microphone. The mic was held in a vibration-reducing harness on an extended boom stand, and placed in the center of the garage floor at approximately 1:10 AM.

I engaged the audio software and asked aloud if there was anyone there, and if they had anything they would like to say. I then left the garage and went back to the computer in the office to analyse the files.

First, I cut the sections of silence out from around my voice. I then took these sections of audio and boosted the gain by +24dB. The hair stood up on the back of my neck when I heard the voice buried in the noise. 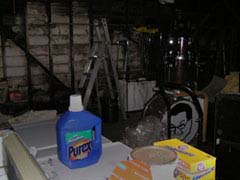 I steeled myself and applied noise reduction and boosted the part of the signal where the voice lay, around 2kHz. The voice was clearly male, and the words easily discernable:

I knew we were running low on Clorox. Perhaps I was just hearing my own inner thoughts within the ghostly hiss. I applied the same processing to the second clip, and froze as I heard the unmistakable utterance.

After a night of fitful sleep and a change of underwear I mustered the courage to explore the garage. 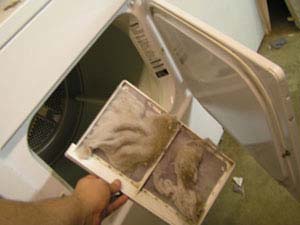 Portal to another world?

Or PROOF of life beyond the grave???

I took down the mic and stand and put them back in the office. I crept slowly back to the garage. I opened the dryer door. I grasped the lint trap, took a deep breath, and yanked it out.

It was packed with lint.

There’s not a soul on this earth that could have known that.

While my experiment in EVP was strictly scientific, I now know that there is another world, beyond our science. I know that there are those who have crossed over and watch us with their otherworldly eyes. The spirit in the garage may very well have saved my life or that of my girlfriend, who pretty much always does the laundry. That dryer didn’t just have a lint trap — it was a death trap. A sure fire hazard. A three-cycle tinderbox, just waiting to burn our future to ashes, along with the elastic band of some permanent press panties.

And although the disembodied voice still haunts me, I feel a sense of wonder with every sheet of fabric softener I toss into the dark window of the dryer.