If you’re visiting this web site, maybe you admire musicians, but the fact is that they don’t contribute to society in any measurable way. Kyle became a musician against every attempt by his mother and father to dissuade him — WHAT HAPPENED? Can you protect your children from the pitfalls that Kyle encountered in his life? More importantly, can you save yourself the disappointment that his parents undoubtedly suffer? Whether you are already a parent, or hope someday to have children, you have a commitment to them, and to society, to not make the same mistakes. Let’s take a closer look at the early signs: 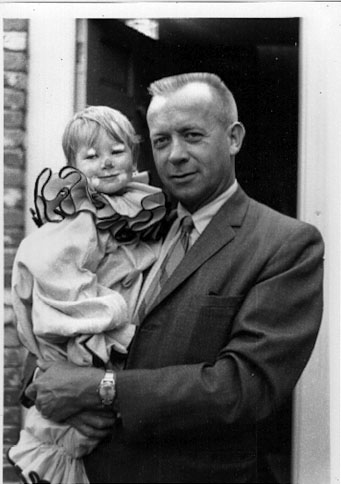 Here we see a happy four-year-old with his father on Halloween. Dad is obviously a successful businessman, Mom a talented seamstress.

Parents – please – remember that the malleable mind of a child identifies with the roles you cast. Look at it this way: Would you rather your child grow up to be scary or stupid? Not much of a choice, is it? When dressing your kids, stick with safe, unscary, non-controversial holiday outfits and unambiguous, gender-specific fashions for everyday use. “But Kyle,” you might say, “what’s controversial about a clown?” No, clowns are not terribly controversial, with the possible exception of convicted serial killer John Wayne Gacy (who was, to be sure, a poor representive for clowns). But while it wouldn’t be totally accurate to refer to Gacy as stupid, scary would be pretty much on the mark. Someone you want your son or daughter to identify with? Probably not. Everybody knows clowns are scary. Gacy didn’t help their rep, and your kid won’t either. 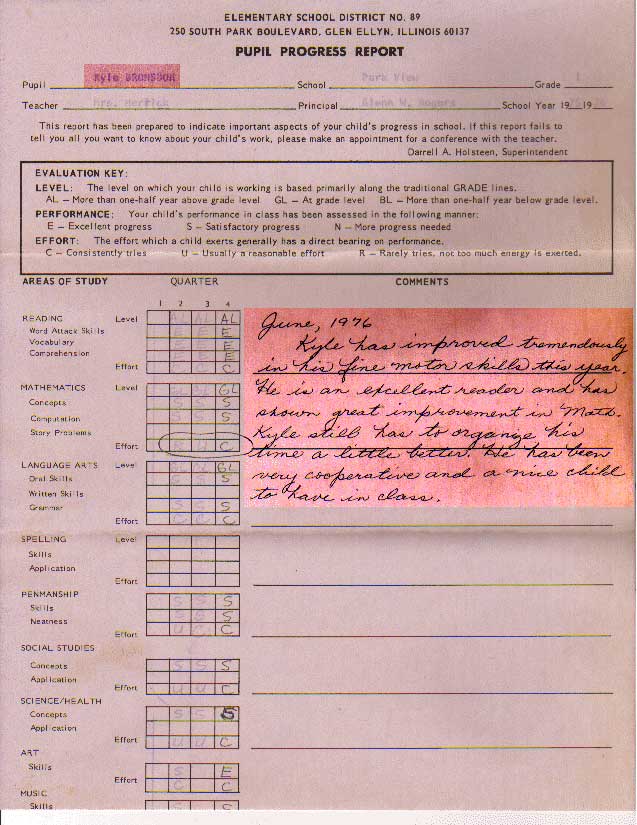 This is Kyle 1st grade progress report. Although the instructor mentions an improvement in fine motor skils, she doesn’t mention how this was accomplished. I distinctly remember this teacher humiliating me in front of the entire class because I couldn’t tie my shoes. So, while my classmates were enjoying a film about a purple cow (the plot of which haunts me to this day), I was fumbling with my laces through my tears, hopelessly working one difficult knot into an art brut rendition of a crochet potholder. And by the end of the year I had “improved tremendously”! Remember – the ends always justify the means, and nowhere is this more true than in the realm of child-rearing.

The report notes problems with time management. As you’ll see in the next panel, “Kyle’s 2nd grade progress report”, this problem does not improve. Very likely because of the poor disciplinary practices of this 1st grade teacher who, as I recall, ended up helping me with the shoelaces. 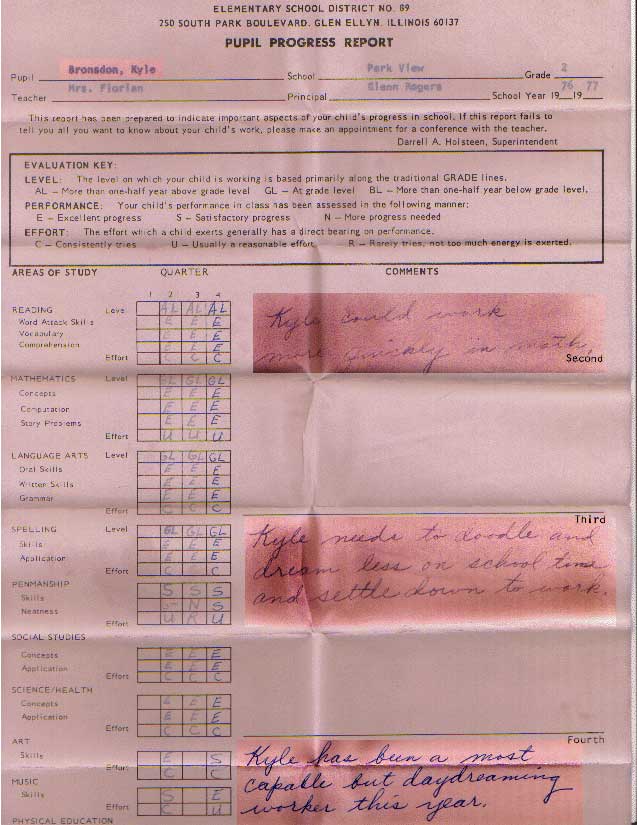 This 2nd grade progress report demonstrates that by seven, Kyle was already on the slippery slope that cast him into the greasy pit of professional musicianship. Math skills, although climbing from the previous year’s merely “Satisfactory” progress to “Excellent”, were apparently not improving FAST enough for the fat, bitter old bitch who was guiding the pupil’s studies. Most troubling though, are the repeated references to daydreaming. While this problem has been greatly reduced in today’s classrooms by drugging children with Ritalin prescriptions, in 1976 this Mother’s (and Teacher’s!) Little Helper was not available, leaving adults with few options apart from writing critical report cards.

Thanks to modern science, we no longer have to suffer much of the drudgery of raising a child, at least in as far as getting their little eyes to fix on the blackboard with the steadfastness of a six-hour cocaine binge. Unfortunately, many useful child-controlling drugs are illegal. Opiates, for example, unrivalled substances for keeping people quiet, were extensively used in infants' “soothing syrups” like Kopp’s Baby Friend in the 19th century. Numerous child deaths resulting from overdoses of the soothing medicines were reported and further lab tests of the day testified to this danger, such as the thirty drops given to a six day old puppy which put the puppy into a peaceful sleep from which, confirming the hypothesis, it never awoke. The determined parent can still procure many Schedule I drugs, to benefit the whole family, but should educate themself to possible lethal dosages and/or combinations. Your government will never love your child as much as you do. DON’T LET THEM TELL YOU HOW TO RAISE THEM! 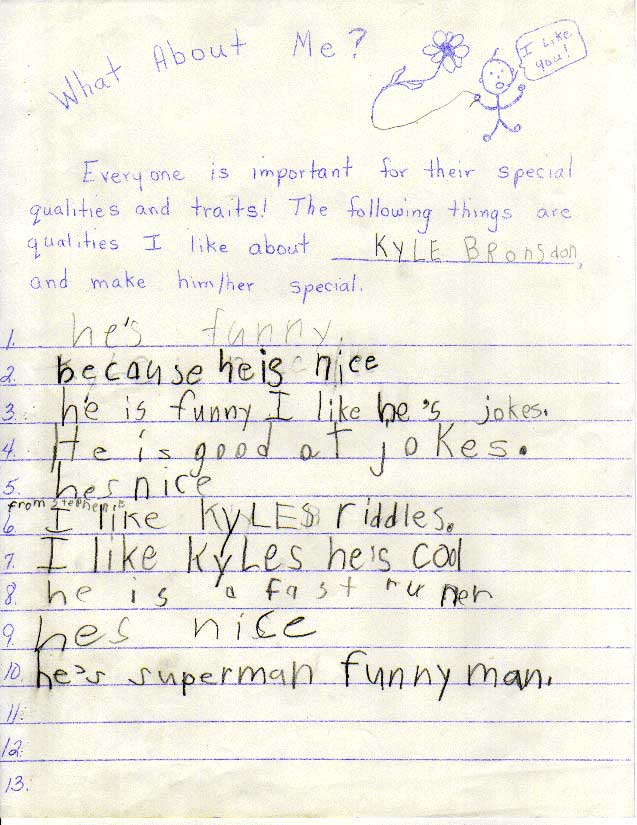 Kyle’s 3rd grade teacher was behind this masterpiece, “What About Me?” Each student was instructed to list “qualities I like about (blank)” that made his or her classmates “special”. Obviously this was intended to foster a sense of individuality and self-worth, which we now know to be the very qualities that mark what I call society’s “Problem People”, especially the individuality thing. Specific to our focus are the comments of Kyle’s peers: repeated references to “jokes” and “riddles”, and, perhaps most disturbing, one child’s appraisal of Kyle as “superman funny man”. Although being a fast runner is indeed a valuable skill (and like any tool, can be used for good or ill – in this case, for example, the tool could be used to run from the cops, which would be good), the other qualities eclipse this one, both in number and import.

Remember that no matter how hard you try, your child may still blame you for any neuroses, job difficulties (including trouble getting/keeping one) or lasting scars they may take into later years, or even those problems they got all on their own. Many successful lawsuits have been filed on parents years after the child has reached adulthood. Don’t be afraid to use “tough love” to create in your child a lasting sense of honor, or, failing that, fear and humiliating debt to you. 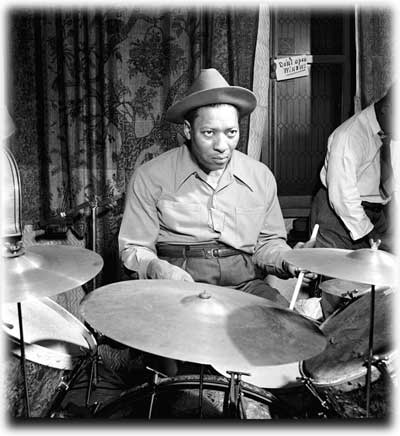 This is pioneer jazz drummer Sid Catlett. See the sign on the open window? It says “Don’t open window”. I’ll bet Sid opened that window. Just get a load of that look on his face. It says, “I’ll open any damn window I want, white devil.” Now, this isn’t to suggest that a person’s race has anything at all to do with what kind of person they are – white jazz drummer Gene Krupa was likely a frequent window-opener as well, demonstrating the same willfulness he shared with Big Sid. They were willfully trying to clear out all the reefer smoke, I imagine.

If Ma and Pa Catlett were alive today, they would probably be quite proud of their son’s major influence on America’s greatest art form (next to airbrushing poker-playing dogs on black velvet), and they might opine, “although we could never get him to keep the windows closed at our house, at least we never dressed him as a clown on Halloween.”

In conclusion, let’s consider another willful personality with an “image problem”: Tonya Harding. How did such a talented, driven athlete get such a bad reputation? In her own words, “It’s an image that the media has given me as a bad girl because of the things that have gone wrong in my life, and also because I grew up living in a trailer. I moved around 13 different times before I was in fifth grade, no money and no friends. My biological mother made or bought my clothes from the Salvation Army or Goodwill. So, you know, that’s where the bad girl image came from.”

I swear I did not make this up. In fact, Tonya apparently takes great pride in her humble beginnings, as this quote is prominently featured on the home page of her web site, but that’s not what surprises me. What amazes me is her iron will. That, and her web designer’s uncharacteristic use of judgement in leaving out any mention of the Nancy Kerrigan episode.

Despite growing up in a trailer, Tonya surely knew that hiring people with not that many less chromosomes than yourself to beat an innocent third party with a tire iron is considered “anti-social behavior”. Nonetheless, she steadfastly kept her focus – to win – and skated her way to victory, albeit a short one. Or was it?

Although she was stripped of her Olympic title and is banned from figure skating for the rest of her life, she managed to avoid serving time in prison (although she did go to jail and get community service in May 2000 for allegedly attacking her boyfriend with a hubcap), dabbled in pornography and is, as of this writing, teaching figure skating in Portland and enjoying a resurgence in popularity, or at least a resurgence in her checking account, due to her involvment in Fox Television’s hit program, Celebrity Boxing.

I know that really wasn’t much of a conclusion, in the sense of summing up the information of the topic in question, but I think it says a lot about the power of the human will. And Tonya is certainly a model of willfulness, which in the final analysis, is really just another tool. Like a tire iron. Or being a fast runner.